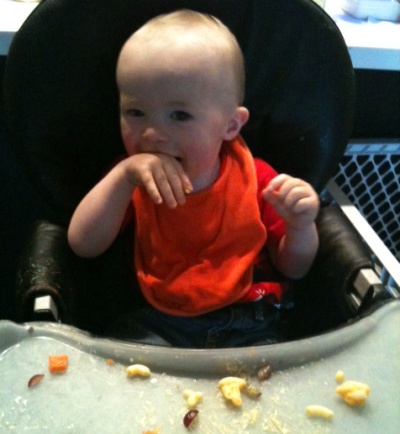 We spent yesterday with a one-year-old so picky we almost didn’t recognize him. It began at breakfast. I had prepared some of his faves — veggie-cheese omelet, toast with blackberry jam, cantaloupe, and red grapes — but Bug wanted no part of any of it. Fearing that he’d starve, I mixed Greek yogurt with fresh peach puree, another fave, and offered it to Bug. He took a spoonful and then spit it all out. What was going on here? Finally, I sprinkled organic cheddar cheese on brown rice bread and toasted it. Mason snapped out of his funk when I served the cheese toast and dug in. I tried once again to interest him in eggs or fruit or yogurt. No luck.

At lunch, Bug was so disinterested in his cooked organic carrots, steamed edamame and peas, juicy red grapes, and lentils that he didn’t even bother playing with his food. Feeling antsy because he ate so little for breakfast — He’s going to get even skinnier! — I offered him organic macaroni-and-cheese made with brown rice pasta. With a shriek of delight he squished the pasta noodles in his hand, flashed us a beatific smile, and jammed it all into his mouth. Chris cracked up but I was finding it hard to be amused by Bug at this point. If Mason were able to talk in sentences, I imagined him issuing this ultimatum: “Cheese or nothing at all, Mommy!” It’s normal for one-year-olds to be picky, but is it normal for them to be this picky?

I was dreading dinner but hoping  cheesy veggies and grilled organic beef burger would be impossible for him to resist. He ate a few bites of burger and then picked up a piece of carrot. Yes! Then he licked the cheese from it, removed it from his mouth, dangled his arm over the side of the high chair, and dropped it on the floor with a gleeful squeal. Not part of my plan. He took a swig of milk and then buried his face in his arm and whimpered. Apparently only cheese-covered bread or pasta would do. I appeased Bug with a few macaroni noodles and then coaxed him into eating a few more bites of burger as well as Greek yogurt mixed with fresh strawberry-banana puree. Not the ideal dinner but at least we got beyond cheese and carbs. Here’s to hoping my adventurous little eater returns soon!

Is your babe obsessed with cheese or something else? If so, what do you do to get him/her to eat a healthy, well-rounded meal?