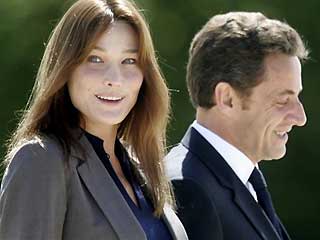 French president Nicolas Sarkozy and his wife Carla Bruni-Sarkozy welcomed their first child together on October 19.

In case you haven’t heard, Nicolas Sarkozy thinks breastfeeding “is a kind of slavery.” According to The Huffington Post, the French president expressed his jaw-dropping point of view while talking to a group of young French mothers yesterday. He went on to indiscreetly share that his wife Carla Bruni, who gave birth to their first child last month, is “worried about not having enough milk.” He also revealed that he’s pleased breastfeeding lets men off the hook. “It does free men of blame because we don’t have the problem of bottle-feeding. You don’t have to get up at night.”

What the h-ll were you thinking, Mr. President?!

Sarkozy’s comments made him sound like an insensitive jerk. He seems to have no compassion for the challenges that breastfeeding mothers face, nor does he seem to appreciate how sacred breastfeeding is. He should know that for many women, breastfeeding is hard and painful and grueling and exhausting, particularly at a time when their hormones are completely out of whack. He should applaud his wife for her efforts, not reveal personal details of her breastfeeding struggles to the world.

I admire Bruni-Sarkozy and every other breastfeeding mother so much. I wasn’t able to breastfeed for long, but I tried my very best, and I’m a little jealous of moms who succeed at breastfeeding. I’m grateful for the fact that Mason’s first food was my breastmilk, and I’m willing to bet Bruni-Sarkozy feels the same way when she feeds her daughter. I hope that after she stops nursing she’ll have some special memories from her breastfeeding experience. I’ll never forget the way Chris teared up the first time he saw Mason nurse, nor the pride and amazement that I felt as I nourished my baby in this special way.

I hope that Sarkozy looks back on his remarks yesterday with regret and embarrassment. (Wouldn’t it be great if his wife made him sleep on the couch last night?) Breastfeeding mothers need to be supported by others, and I’m so disappointed that a person with so much power would make such discouraging remarks about breastfeeding. I hope that he apologizes to his wife and tells her how proud he is of all the efforts she’s making to give their daughter a healthy start. And I hope that one day he’ll be able to recognize what a miracle breastfeeding is.

31 thoughts on “Nicolas Sarkozy: A Determent to Breastfeeding Mothers”