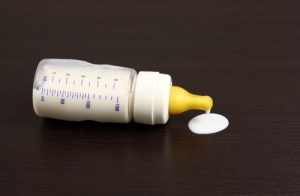 I stopped breastfeeding Mason when he was five weeks old, for a variety of reasons, and I felt incredibly guilty about it for months–even though it was the right decision at the time. I gave Mason a formula that I (and our pediatrician) felt good about, and I focused on finding other ways to bond with him. But I still felt a little wistful when I watched friends nurse their babies.

Now there’s a new development in the works that could give formula-fed babies (and their moms) a boost. According to a report published in Science Daily, a microbial engineer at the University of Illinois has synthesized a sugar in human milk that is thought to protect babies from pathogens.

Of course the human milk oligosaccharide (HMO) is incredibly expensive: 1 milligram of 2FL (the shorthand scientists are using to describe it) costs $100 and a single study would require $1 million worth of HMO alone. Scientists will need to do a lot of testing before something like this could ever be released to market–who knows whether it’s really safe. And given the prohibitive cost, it’s hard to say when or how those studies will take place.

But despite the obstacles, I find the prospect of something like this to be very exciting. To be clear, I’m not saying formula with this HMO would be superior to breastmilk. I’m just saying that for moms who can’t breastfeed (think of my sister), or who just don’t want to, any advancements that would make formula more healthful would be awesome.

What do you think?

Photo: Bottle with milk via lorenzo_graph/Shutterstock.com